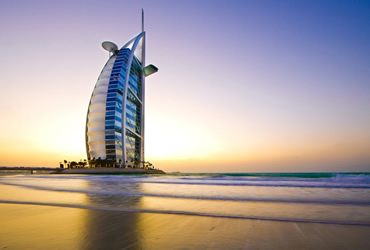 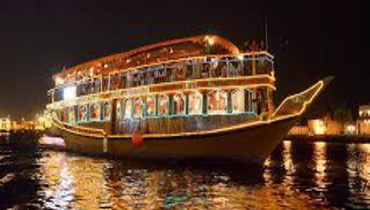 Arrive Dubai! Enjoy the Dhow cruise with dinner this evening.

Today, embark on your exciting holiday to Dubai with Air Tours as you arrive into Dubai. You will be met by our local representative after clearing customs and immigration in the arrivals hall. Your transfer awaits to transport you to your hotel. Tired of strolling down the busy roads? Hop on the majestic Dhow for a relaxing journey of the Dubai Creek. Sing to the tales of old Arabia as you pass by the Bastakiya houses and see the traditional abras all lined up along the coast. Dine and dance to the Arabic folklore and taste the traditional cuisine while onboard. 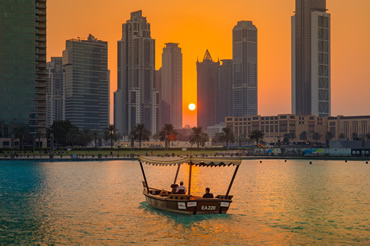 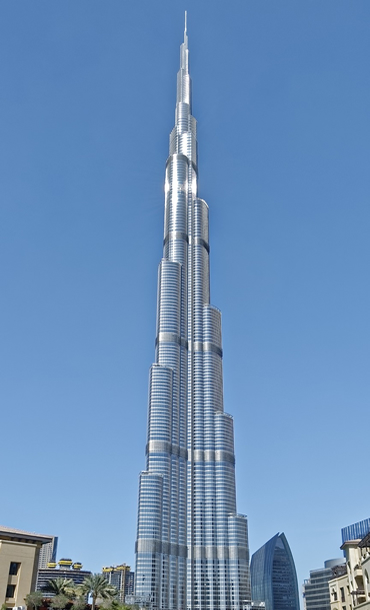 Witness the famous landmarks of Dubai on a City tour. Visit the Observation Deck of Burj Khalifa – the tallest structure on the planet.

After breakfast in your hotel, discover the new and old of Dubai. One of the best ways to explore both the historic and the glittering sides of Dubai often referred to as the Middle East Gem. Starting from the Dubai creek the tour The Jumeirah Mosque is a popular point of interest covered in this itinerary. For a peep into the glitzy side of Dubai our itinerary comprises of a tour to such phenomenon attractions such as the Burj Al Arab hotel - the world’s only seven star hotel that is specially noted for its distinctive silhouette resembling a billowing sail; the Palm islands - the crescent shaped man-made island; Atlantis hotel and The Burj Khalifa - the towering building that is one of its kind in the whole world. Equally noteworthy are Dubai’s scenic attractions and a visit to the well maintained Jumeirah beach will provide you with an equal opportunity to immerse in the city’s natural beauty. The journey ends with a drive through the Sheikh Zayed road that has imposing skyscrapers lined up in its either side and shopping at one of the city’s most prominent shopping malls. Whether you are a history buff, a shopaholic or just here to have a glimpse of the city’s significant to.

Burj Khalifa Tour - Standing 160 stories tall, Burj Khalifa is not only the world’s tallest building, it is one of the most prominent skyscraper of the 21st century. Inspired by the regional desert flower, Spider Lily, this building is an 828 meters marvel that houses, Armani Hotel Dubai and the Armani Residences. One of the most photographed buildings in the world, it also features two observation decks. Another highlight of this tour is the multimedia presentation that not only chronicles Dubai’s history but also depicts the epic journey that led to the creation of this one of a kind structure. Enter the fastest 65 meters elevator that will take you 124 levels above the ground to the Observatory Deck for breathtaking views of the city. Located in Downtown Dubai, it is surrounded by The Dubai Mall, Mohammed Bin Rashid Boulevard, Souq Al Bahar and the Address hotels.

Overnight stay at hotel in Dubai. (B) 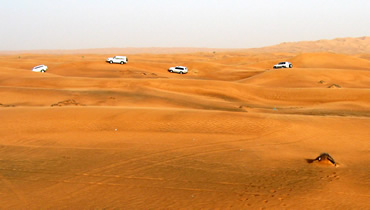 Wake up to a leisurely and relaxed breakfast this morning. Head out to the many luxurious malls for some great shopping and souvenirs to take back home, or relax and enjoy the facilities of your hotel.

Leaving back the hustle and bustle of the city enter a complete new world – the world of adventure in the sand and romance in the wind. Our desert safari guides will take you in a 4x4 SUV, on an exciting and thrilling journey over breathtaking sand dunes. Watch the magical sunset across the desert with the cool gentle breeze flowing across – a photographers paradise. Once you reach the camp, the traditional ambiance will enrich your experience. Relax on comfortable cushions as you sip Arabic coffee, get henna designs painted on your hands, take pictures in traditional clothes and a falcon perched on your arm. Enjoy the sumptuous traditional food in a buffet that features a variety of salads, barbeque meats and deserts besides the main meal. End the tour by experiencing a display of traditional Arabic dance by a belly dancer and other performers.

Enjoy breakfast in your hotel and time to bid good bye to Dubai, as you check out of your hotel and transfer to the airport for your flight back home, loaded with wonderful memories of your holiday with Air Tours!! (B)

PACKAGE PRICE PER PERSON BASED ON MINIMUM 2 PAX TRAVELLING TOGETHER. VALIDITY : OCTOBER 2021 TO MARCH 2022

Supplement cost for upgrade to private sightseeings : US$ 115 per person

Before departure from UAE if proceeding to India:

PLEASE NOTE: Please note that failing to comply with the above mandatory rules may lead to denied boarding.